Webster Police Chief in New Hampshire Hired:   Less than a month after Webster’s former police chief Liberatore dropped his lawsuit against the town, officials are ready to hire a new one. 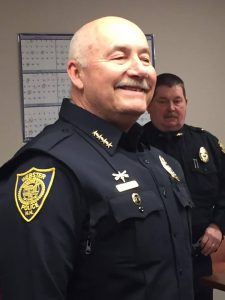 Select Board Chairman Bruce Johnson said the town has offered the job to Steve Adams, a retired police chief from Northfield.   “He is well-known and well-liked and comes highly recommended,” Johnson said.  Adams has raised his family in the Lakes Region area and continues to live in Franklin with his wife Janva, a life long resident of Franklin.

Adams, who retired from Northfield in 2013, is paid an annual pension of $31,143.72 from the New Hampshire Retirement System, according to state records.  Adams will begin in Webster as soon as his background check is completed. He is certified with N.H. Police Standards and Training, Johnson said.

“The select board has a town to run,” Mayer said. “They’re moving forward.”

SEUFERT LAW Office congratulates Ltd Adams and wishes him the bet in his new career pursuits.