Franklin NH High School’s First Robotics Competition – As first teams scrambled to finish their mechanical contraptions by the worldwide Stop Build Day, it becomes clear that not all robots are created equal.

That crucial deadline passed Feb. 20, and on the Saturday prior New England high school teams gathered in Bedford to test their robots on an official playing field for “Week Zero,” a kind of preseason scrimmage time for teams to work out the kinks before official competition starts.

The first-year team from Franklin High School was struggling with a robot that wasn’t wired correctly and wouldn’t move. Despite all their efforts, they couldn’t fix the problem before testing time. Team 7314 – the “Tornadoes” – showed up with their robot still in pieces.

When the Franklin members arrived, they found other teams quick to offer assistance, including, by complete coincidence, Team 1721 from Concord High School, which has been mentoring the Tornadoes all season.

“It was astounding how many people were there to support us as a new team and how much community service there was between teams,” Guillotte said.

Even with a robot still under construction, Franklin was able to send players to participate in their alliance matches, and the team soon found themselves facing the playoffs.

“The first playoff match we did not make it onto the field just because we did not have the bumpers on yet,” Guillotte said. “So we duct-taped them to infinity and beyond and put it out the next match.”

For a handful of matches, Franklin’s robot was on the field scoring points. Their alliance competed and won against some of the same teams that were assisting Franklin only hours prior, ultimately reaching the semifinals and finished the competition in third place.

“It was really welcoming and really amazing,” Guillotte said, describing the outcome as well as the acknowledgements that other team captains gave her and the Franklin team at the end of the event.

Since that testing session came and went, the Tornadoes have kept on working, pushing past Week Zero to continue work on their bot. They most recently took advantage of allotted time in preparation for their first qualifying competition.

They were building a scooping subsystem that will allow their robot to dump blocks onto a scale, they slowly cut a sleek polycarbonate down to size with a hacksaw, and they replaced those duct-taped bumpers with blue and red cloth-covered sets attached with staples. 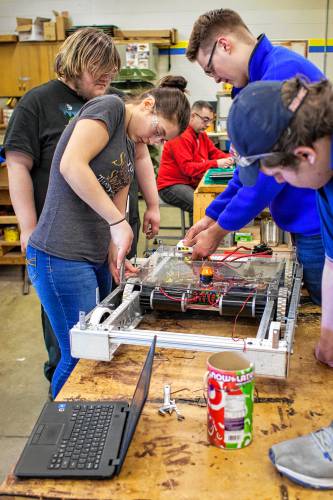 But like the Tornadoes, a first-year team that showed up to a scrimmage with a robot in pieces and walked out with a chorus of support, the robot was still a work in progress; not all of its rough edges had been smoothed out.

There’s still a little duct tape on the bumpers. But it’s holding.

(Elizabeth Frantz can be reached at efrantz@cmonitor.com or on Twitter @lizfrantz.)